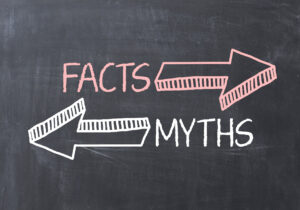 Before we talk about these myths, there is a context that each of us should have that is often overlooked.

We need to understand that there are literally thousands of scenarios that could happen where you might need to defend yourself or a loved one! It could happen at a concert, the mall, an intruder in your home, church, or just walking down the street!

For instance, think through these questions about any given situation:

Does this person have a weapon? Do you? How many weapons? What kind of weapons? Are there objects nearby that can be used as a weapon?

Does the perpetrator seem to have some skill, or not? Do you?

Are you outside or inside? Near civilization or not? Is there a crowd or are you alone?

Is it cold [icy surfaces] or hot [possibly dry and dusty condistions]?

Is it well-lit or dark?
Etc…

Each time you introduce a new variable the decisions you make might change. Each variable can make a big difference in how you react and/or strategize!

Self-defense needs to have a holistic approach and be well-rounded in its scope. For example, there are rare times a gun might be the best option, but often it’s not. Sometimes, you can try to talk your way out of a situation and choose to forgive whoever is trying to mouth-off.

With all that said, there are many myths about self-defense training! You can actually benefit just by knowing what those myths are. Once you know the facts, you are far closer to defending yourself! 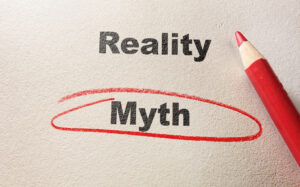 Here are some myths people believe followed by the truth of the matter:

1] MYTH: “I don’t need to learn self-defense.” For many people this is their first thought. Usually this is accompanied by these beliefs; “I will just call the police,” or “I’ll let my spouse or [guard] dog defend me.” These beliefs likely originate from a false belief that someone else is always available and willing to save you.

TRUTH: In the time it takes for an incident to happen, likely NOBODY is coming to help you. Assuming you had time to make a phone call to the police; Police response times vary depending on how far away they are when dispatch gets the call. Sometimes police response time is seconds, but most often its many minutes, or even hours later! Often you won’t even have time to make the call to the police in the first place. Also, your spouse isn’t always with you and neither is your guard dog! Or it’s possible they could be tied up in a multi-attacker situation.
Attacks can happen at lightning-fast pace with no warning. They are usually over in a few seconds!
What are you going to do if nobody else is there? YOU need to protect YOU [and possibly others]! In the end, nobody else will.

2] MYTH: “I took a self-defense class, so I know how to defend myself.”

TRUTH: What you learned in that self-defense class was possibly a good start, but far from what is necessary to learn to defend yourself! There are NO 1-day [or even week-long] seminars on the planet that can prepare a person to defend themselves accurately and thoroughly for the rest of your life. It takes repetitive and ongoing training to engrain the type of skill, attitude, mindset, experience, and awareness that it takes to defend yourself and be prepared for a plethora of circumstances.

TRUTH: While there are times using a gun is warranted and effective, most attacks don’t take place at a distance where a gun is useful. Attacks often take place within arm’s-length at a pace that doesn’t give you enough time to even draw your weapon. This has been proven repeatedly by the now famous “21-foot rule” taught to law enforcement. Look it up.

The truth is you need to be able to defend yourself when it’s just not possible to carry and/or use a gun! You need answers to empty-hand defense and other weapons-based attacks. As great as it is to carry a gun, [I am pro-second Amendment, by the way!] the gun you have just won’t cut it in many situations.

TRUTH: Knowing a few general techniques is not enough!
Take another look at the list of situations mentioned earlier. Do you have self-defense answers for all those situations? For instance…
Jiu Jitsu is great for the ground, but sometimes you DON’T want to be and shouldn’t be on the ground! What if the guy has a group of friends with him and you’re tied up on the ground while they are all taking turns kicking and hitting you?

What if he has a knife and you’re only conditioned to grappling? You’ll be Swiss cheese!

Or, if all you know is Muay Thai and you’re caught fighting on ice, the ground may do more damage to you than your attacker would!

Lastly, what if all you know are high kicks to the body or head like Tae Kwon Do, but you are in a confined hallway or the narrow walkway of a boat? Most of those kicks just became useless. Now what? You’ll be wishing you had some trapping, locking and hand skills!

TRUTH: You don’t have time NOT to train! Self-Defense is like having a fire extinguisher nearby. The value of self-defense’s is often unappreciated until it’s needed. We all hope we will never need to use it, but it’s much better to have it and not need it than to need it and not have it! Plus, it’s just plain fun to learn and train!

6] MYTH: “I am not talented or athletic enough.”

TRUTH: Nobody was born with the innate ability and skills it takes to defend yourself – It is learned and if you can read this document, you are capable of learning Martial Arts! For some it comes easier than others, but everyone can learn how to do it. The person who holds back will never learn. You CAN learn, grow, change and better yourself. Believe in the gifts and abilities God gave you!

TRUTH: It’s never too late to start! I’ve had several students who were training in their 60’s and 70’s who became excellent martial artists!

8] MYTH: I body-build/work out a lot, so I can defend myself.

TRUTH: Strength is good, but it’s not everything. I’ve trained several bodybuilders that I personally cannot overpower with shear strength, but I could easily outmaneuver and/or leverage their weaknesses to overcome their strength. In short, technique trumps strength. Also, if weapons [like knives] are involved, strong people still get cut and bleed. Strength does not heal mortal wounds rapidly enough to survive. Technique WITH strength is most effective.

TRUTH: You will likely end up hurting yourself just as much or worse than the attacker. While this technique has been taught in women’s self-defense for decades; if anyone has ever tested it out for themselves with force and speed, they will find out that it usually rips your hand apart. If a situation is desperate enough and that is all you have, then sure, use your keys. It’s better than nothing. But understand you are likely going to walk away just as injured as your attacker. Instead, a better option is to train yourself to be the weapon.

Here are some very useful tips for the use of car keys in self-defense.
1] Keys SHOULD be carried in your hand as you walk to your car so that you aren’t fumbling through your pocket or a handbag and looking away. This keeps your head up and eyes open to potential threats around you.
2] Keys are also useful to carry in your hand so you can hit the alarm button on your ‘FOB’ and gain attention to your location. That is a great deterrent to most attackers.
3] If the attacker wants your keys [to steal your car] you can throw them far from you in the opposite direction you are planning to run to draw the attacker away from you, before you run away.

10] MYTH: I’ll hit the other person first to stop their aggression.

TRUTH: This assumes several things: 1] you saw the attack coming and 2] that you are faster than the other person. Both of those assumptions might be false!
Second, if you do this you might have the upper hand but legally you just became the attacker. Legally in most places, hitting first isn’t self-defense – it’s assault. Stay on the right side of the law.

TRUTH: Not all Martial Arts are created equal or for the same functions. Some are geared to the ring, some for the military while wearing tactical gear, still others are geared to meditative practices. This is too large of a topic to tackle here—but martial arts DO work very well for self-defense with the proper training and mindset. For instance, Jeet Kune Do and Kali are excellent arts for self-defense!

Knowing Martial Arts won’t always save you in every situation, but it can and will help your chances!

Act and start your training!

At Synthesis Martial Arts we make it fun to train and have a great community who care about each other as well as continually growing in skills and fitness! 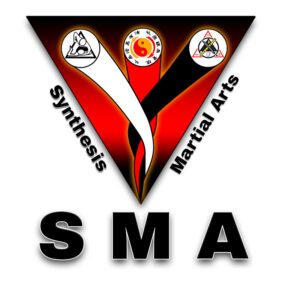 Book a FREE lesson and see our full class schedule.

Simply fill in the form below…

** We will never sell your info.  Opt out at any time.